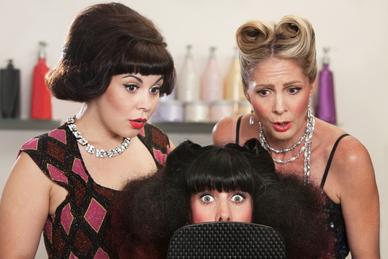 LIVING IN THE MAKE-UP FREE ZONE OR WHAT DAY IS IT?

I was happily in a make-up free zone until last night at 10:30.  I was falling asleep on the couch watching “The Holiday” which I have now seen 7 ½ times in the last week, when I desperately had to pee.  So barely awake in my ratty t-shirt and flannel PJ bottoms covered in tiny Hawaiian Santas, I stumbled into the bathroom.  I have mastered peeing in the dark but mistakenly switched on the lights.  I gasped and may have briefly lost consciousness after glancing in the mirror. I didn’t mean to, it was a big fat life-ruining mistake.  Was that me?  I stared harder and closer, another mistake but in fact it was me.   I grabbed the counter to stop from collapsing.  Had I come back from the dead, or was I already dead?

My hair looked like a bird had set up home in it and if so I hope it knows how to cover my graying roots. I should have left and come back another day but was riveted to my face.  Admittedly, social distancing and isolation have influenced my daily grooming routine but didn’t realize it had deteriorated to “Wicked Witch” proportions.  I am brushing my teeth, but not my hair and had been in a make-up free zone for over a week which was freeing but apparently a very bad idea.  Now what?  It was 10:30 at night and have never put on make-up at that hour as usually I’m washing it off or deciding whether I could get another day out of it.  But desperate times called for desperate measures.  Was there a cut off time for applying make-up? I thought I might actually sleep better looking better. I have obviously been in the house too long.

I had no idea where to start as every part of my face was a cosmetic 911 situation.  I was consumed by my trite thoughts and proceeded to whip out my make-up bag and flat-iron.  I slathered my face in moisturizer to stop my skin from further ruin or looking like a Roman ruin.  Slowly and with shaking hands I tried to apply eye liner but my nerves were shattered and the line looked like a blue lightning bolt.  Very Harry Potter but Halloween was months off.  I started having second thoughts and make-up remorse.  Did it matter especially at 10:30?  Or in this time of social distancing did it matter at all?  Truthfully, the lightning bolt was growing on me.  And being an animal lover how could I upset the bird especially if it could use my hair to help build a home?

The only conclusion I arrived at as I turned off the lights and carefully avoided glancing in the mirror as I left the bathroom was that I would never again watch “The Holiday.”