I was never good at games. Monopoly almost did me in as I never won a round or accumulated property. I longed for Park Place but always ended up in jail. The only card game I ever tried and won was War, but that's just the luck of the shuffle. Forget Backgammon as the board made me dizzy and involved thinking. Being Jewish, I noticed that we have a special game everyone loves and wants to play: Jewish Geography. When there is more than one Jewish person in a room - let the game begin. It's basically: Who do you know? Where are you from? Do you know Sam Schwartz's first cousin Diane because my Uncle David was married to her niece, but I think they got divorced and Sam also has a bad case of gout. This goes on until someone knows someone regardless of how distant and then there's a big sigh of relief. It makes my eyes itch and cross. I usually know no one and when these conversations start I long to be an orphan.

I moved on to a more relevant line of questioning as an adult. Where did you go to college? Are you still working? How many times have you been married? Is your divorce final? Do your children live at home? Can you drive at night? What time do you eat dinner? The answers reveal a lot about a person including whether or not I would have to drive and eat at 5:30. I have been married twice so I am not judgmental about the number of spouses unless it's in the double digits.

Now I catch myself playing a new game which is totally surprising and makes me long for Monopoly. Out of nowhere, the questions have changed. Recently I was on a walking date and the conversation turned from how many children and grandchildren we had to high cholesterol and sleep meds. Suddently we were talking Lipitor, Pravachol and edibles. It was almost intimate.

It's that time of life to play Pharmaceutical Geography. Over fifty anyone can join the game! In terms of dating, what better way to get to know someone than learning what meds they take? Out with, are you a Republican or Democrat and in with what prescriptions and supplements do we have in common? Got Black Cohosh?

Things in common are always a big plus. It used to be movies, hobbies and careers. Now it's Lexapro, Prozac, Wellbutrin or Zoloft. I find it comforting to bond over anti-depressants and therapists. My last date was a therapist and it turned out he medicated me via high cholesterol and needing a new knee. He limped, poor guy.

So far I have all my original joints, but 38 years of running and now living in a third floor walkup are wreaking havoc on my left knee, as well as my doctor shaking his head about my right hip on my bone density test. I'm never taking another one to assuage his worry and mine. A handful of Advil and nothing hurts. I'm an Ibuprofen fan but feel a kinship to those who love Aleve or Naproxen.

Sleeplessness never fails to be a hot topic with friends and dates as I don't know anyone who has had a good sleep in years. My last one was when I was seventeen and got up rested at the crack of noon. A solid 10 hours with not one bathroom break. I call those the "good old days." I have read every available article on how to get a night's rest, and all about the new phrase "sleep hygiene." That still confuses me. Does that mean a shower or clean sheets or a hazmat suit? I recently listened to a podcast on AuperAge with Dr. Michael Breus who is a sleep guru. I believed every word of advice he gave but I I would need him to move in to really help me out! I've noticed among my friends it's an Ambien or Lunesta world. Although lately, I've heard magnesium thrown in the sleep mix and anything with the word "Calm" in it. OMMMM.

Exercise is the "get out of jail free card" in Pharmaceutical Geography. Walk, run, lift weights, ride a bike, hike, swim, ride a horse, or surf - just keep moving. And feel confident if your joints disintegrate in the process there is a replacement for every one.

NEW: What's in YOUR 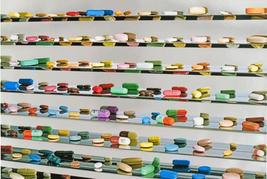