I am a knitter in training. I suck, but I love it. I have become crazed with picking up my bamboo needles whenever I have a free moment. I even love the needles; so shiny and smooth yet maddening as they betray me and drop stitches as holes appear. Curses! Leslie, my expert knitter neighbor, is teaching me to knit, for which I am certain she is sorry as sometimes I go running down there at 3:00 a.m. crying I lost count of my stitches or dropped a whole row and have a knitting emergency. Yes, I know it's the middle of the night but it's my first scarf! My friends laughed when I told them about learning to knit, suggesting that I must be ready for the "home" or grace. Were they right? Is knitting just for old women with cats and a rocking chair?

NO! Thank you, Tom Daley (Olympic gold in the synchronized 10-meter platform dive and bronze in the individual) for not only winning but knitting! Yep, there he was sitting by the pool awaiting his next dive, with yarn and needles.  Apparently, I'm not his only fan but 3.4 million others on Instagram. Knitting raised to 10-meter heights. He was making a sweater for his dog, and an Olympic logo sweater while I was home dropping stitches making my remedial-level scarf. The depressing part is he took it up last March to get through the Corona lockdown and is now making clothing. I was hiding in my apartment acquiring a taste for Grey Goose Vodka.

Should knitting become an Olympic sport? It seems everything else is: skateboarding, BMX bike freestyle, and surfing; after all, did the ancient Greeks have BMX bikes, skateboards, or surf? So subsequently, I propose knitting! And just think, it could be in the winter and summer games, as weather is not a determining factor.  The Finnish teams were seen knitting on the slopes between runs during the last two winter games, making hats and blankets. It's epic.

Speed knitting mittens and matching hats with extra points for design would be riveting. And who wouldn't jump at a chance to get a ticket for the kitting relays, especially the men's 100 meter! Dexterity and superhuman hand-eye coordination, as well as speed, would be mandatory. Marathon knitting would require a sweater to be completed and judged for artistic merit in a time allowed. This would be an open event for both men and women. And skateboard knitting would bring excitement to the games as well as a lot of thrilling wipe-outs with needles and yarn flying through the air. Most events would know no gender specificity which would be an Olympic first. It's knitting; all chromosomes eligible.

And don't be fooled into thinking it's easy. It's bloody hard. There is so much to learn and way too many stitches for me to remember: garter, cable, purl, seed, intarsia, beginner lace, rib, reverse stockinette and fair isle. My brain just exploded. I have yet to master how to cast the yarn on the needle even after having been shown forty-three times as well as watching YouTube videos at all hours of the day and night. I spend a lot of time begging my neighbor to do it for me. Her patience is boundless, which bodes well for me. I am on my third scarf as that requires nothing tricky or the frightening and mind-numbing idea of a pattern. Patterns remind me of failing geometry. There will be no Olympics in my future. And FYI: don't drink and knit as that is a sure-fire way to lose count of your stitches or even remember how to count.

When not drinking and knitting I find it relaxing and meditative. I'm not sure it will replace my therapist in the near future, but it's a good activity between appointments.

I do not aspire to be an Olympic knitter any time soon or ever. And I will feel really lucky to ever make anything more complex than a scarf. Although I am considering sewing them all together to make a blanket. I think that's the coward's way out but I don't care ... I'm a knitter in training. I am not, however, getting a cat and rocking chair.

CELEBRITY KNITTERS: Of which I am not one! 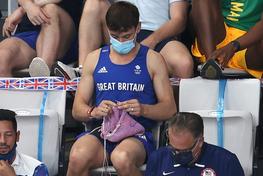 HAPPY KNITTING TO ALL AND TO ALL, NEVER

GET THE NEEDLES TOO CLOSE TO YOUR EYES,

ESPECIALLY WHEN HAVING A COCKTAIL.